And work has been progressing! Not as fast as I’d like, but there’s no speed that’s too fast! That said, it has been a DAMN lot of fun! I’d forgotten just how rewarding it can be to work on big long term physical labor projects. Most of what I’ve been doing is work on the house (LAME!) or doing more small scale miniature wargame related stuff.

I’m pretty ecstatic at the arrival and work so far on the 818. I haven’t done much yet, but it’s been good. I’ve gotten everything inventoried and requested replacement for a damaged part (which should arrive on Saturday next week). And I’ve gotten both floor pans in as well as about 1/3rd of the front firewall. I took a break though as we’ve had great weather and resumed stripping the former WRX for parts.

I even finally got the blasted wiring harness out! Man that thing makes me very nervous. Couple nicks in the insulation and I could be chasing electrical gremlins until the end of time. While the task seems incredibly onerous, I really think the best path forward is going to be to strip the harness to it’s absolute minimum. The ECU will probably cause me some problems, but I’m hopeful there’s ways around it. The problem is there’s so many bits! So many random weird unlabeled electrical mystery boxes! Ah well. It’s miles before it’s time to really deal with the harness. Next up I need to finish stripping off the front suspension, then I can ADD the first big hard parts to the chassis! Can’t wait! 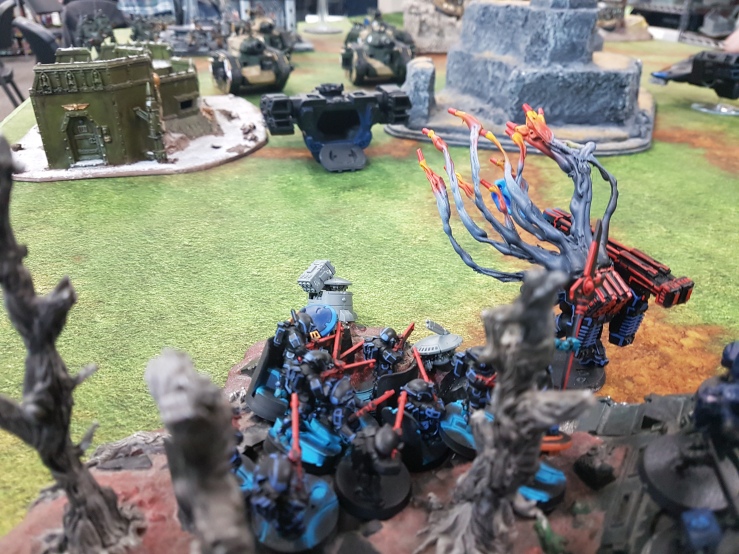 Of course I’m still doing other projects too. Here’s a quick view of the latest. My cursed ‘friend’ got me…*sigh* into Warhammer 40k. I’ll be quick to point out that the latest 8th edition version is actually a pretty dang smooth game. It is a pretty impressive way to play out a large scale conflict. I think other games are very much better, but this does scratch that itch for a game that has large scale combined arms. Here’s the thing too, while games like DropZone Commander and Kings of War are all about large scale conflict, the problem to me is that your infantry in DzC is 5 man to a base, or in Kings you’re looking at sometimes 20 or 40 men to a base. Well when it’s just one big moving object…I don’t care how many ‘troops’ are on it. It feels like one unit to me. In Infinity my all time favorite game, it’s a skirmish. 10-20 troops per game and really with the armies I’ve played it’s more like 10-16; Kings of War I’ve probably got about the same number of units, each of those units took forever to paint because there’s a bunch of guys on there, but to me it still feels skirmishy because it’s about the same number of units. that’s the real advantage that WH40k has when it’s an army on the field. It feels large scale, because it is, in the case of one game’s army shown below, there are about 73 models on the table. Each model’s on it’s own base, so you see your army getting cut down and losing it’s effectiveness. Losing half a unit makes for a physical change on the battlefield, and that is pretty cool to watch.

That looks like a large scale combined arms force. There’s a small contingent of airpower, a brick of angry tanks, a pair of APCs loaded with infantry, a bunch more infantry, and a giant robot battlesuit… which I grant is not generally part of a combined arms attack for current militaries… probably because giant robot battlesuits are pretty ridiculously impractical so far (and probably forever).

I would also be remiss if I did not mention the sad passing of Spectre ‘Baloney’ dog. He was a good dog that I took care of since February 2009. He was a good dog. I’ll definitely miss him. Luckily because he was diagnosed with congestive heart failure, we were able to have one very happy week with him before we had to put him down. A week where got a whole burger, a hot dog, sausage and rice, and to cap it off a steak and mashed potatoes! He was a happy happy dog!

Oh and we went to the coast! The dogs loved it!