Well it hasn’t been super productive the last few weeks. Last weekend I ended up catching the same cold my wife caught. Saturday and Sunday I was sick as a dog; luckily I had some role models on how best to recover:

So naturally, I spent the weekend shopping for parts! On their way is the clutch and flywheel plus a handful of other project stuff that I’ve been meaning to order. Including a brand new linear actuator…for a new project!

Meet project Coffee Table! Not too much to look at yet. I started work on it last weekend, though I’ve been working the design off and on for a while. Unfortunately, I then got shipped off to a trade show and couldn’t continue work. That said, I’m looking forward to continuing I haven’t done any woodworking in a while and it’s a fun change of pace from motor assembly…that and it’s a coffee table that’ll have a built in, actuator driven 50″ touchscreen…because it’s funny.

Other than that, the car’s coming along slowly…and not so surely. The engine has been driving me quite mad. There’s so many small components, hoses, and bolts that seem to be missing. It feels like I find a piece that needs assembly, then find out I don’t have all the bolts, so I order the bolts, then find out that I didn’t realize some other part attaches to this part and it has to go on first…but I don’t have the correct bolts for it either. It’s been very frustrating. That said, the heads are on, the timing belt’s on, the exhaust is on, the harness is getting close…Need some bolts for the intake and then I need to figure out where all the vacuum lines go…still progress is progress!

Progress! I didn’t manage to do much this weekend sadly. Just made for a bit of a lazy weekend, which was nice in it’s own way, but after talking with Factory Five and Stewart Transport, then looking at calendars…well…I have my work cut out for me! The kit’s due to arrive around the end of August/beginning of September. Should be reasonable weather and out of the way of any important events.

That said, between now and then is not so long in time, especially time where it’s cool enough to work! I’ve got to:

1. Strip the donor of all its useable parts, get rid of the lifeless carcass and hopefully sell off as much of it as possible

On the plus side I think I can get rid of one whole tool box and if I move a few things around, I can probably clear enough space to get rid of or relocate the central work bench. The SV650 can go outside, and I’ll put a cover over it. The table saw can fold up, as I don’t forsee much work for it in the next month or two. I can move a few things upstairs (perhaps some of the boxes of FFR stuff once it arrives!). What I do still need though is an engine stand and a hoist. Motor’s on the back burner for a bit though, there’s plenty to do stripping the WRX, cleaning up/repainting parts, and organizing stuff. Besides the motor’s a ways into the build. It starts on Pg 156! That’s miles away from where I am now. That said, I do need to call the machine shop and schedule the Head Work…could take weeks depending on them…

Pg 28 is complete though! There’s a page or two ahead of the game that I’ve finished too, but it’s important to make sure I get everything necessary. Teardown finishes on Pg 52…so still a ways yet and the tough bits like suspension, trans, rear diff are yet to come.

Excellent! Finally got a bit of cool weather to begin the teardown on the WRX. Technically, I did pull a few things earlier in the week on Tuesday while I was waiting for a guy from craigslist to look at my old windsurfing gear. But technically doesn’t matter! This is the first real focused time I’ve had and the first after more thoroughly studying the manual. It’s a bit tough because there’s lots of ambiguous notes like take off the door latches, hinges, and all the hardware…does that include this little very breakable plastic thing?!

Nonetheless we have progress! The rear doors and rear seats are out (and listed on craigslist), but more importantly the door hardware has been bagged and tagged along with the rear seatbelts which will be used in the 818. Some excellent progress so far. 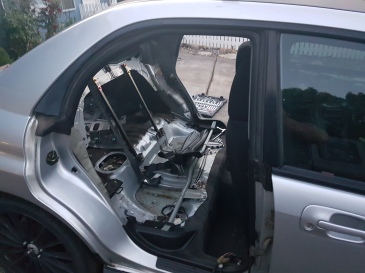 Which brings me to the second point of excellent news. I called FFR, sounds like a 6-8 week lead time, so I gulped a bit and pulled the trigger. My order has been placed… the 818C will be on order and damn expensive. Then again, I look at the price of a new car or even a used car a few years old and it seems like a bargain! To be fair though, my choice of vehicle does require a bit more effort… Next cool(ish) day, front doors, front seats, consoles, etc! 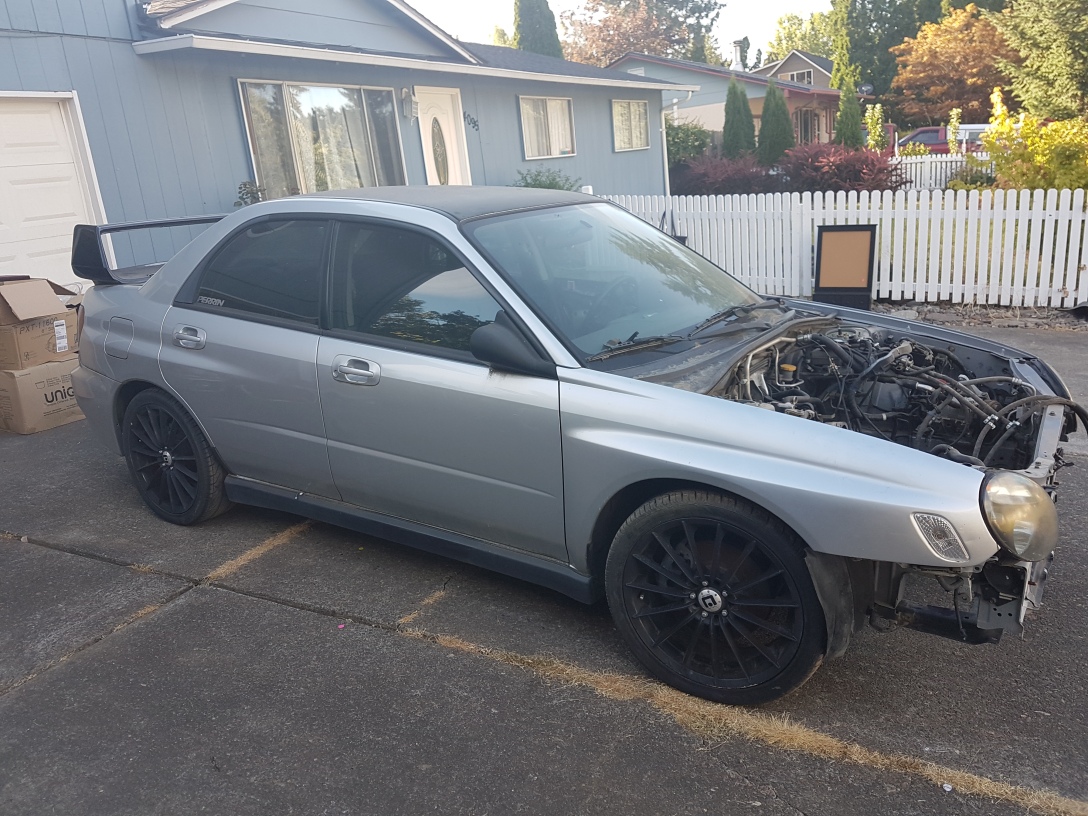 A Kit Car has always been on my bucket list. It’s just been something I’ve always wanted to do. funny enough when I sold my last ‘fast fun car’ a 96 Ford Mustang which ended up being neither, having a great many mechanical problems and just not generally being manueverable (I was used to Miatas)…Hmmm… an impressively run on sentence so far. Let’s restart, when I sold that POS Mustang I said my next car is going to be something I REALLY want. The SV650 was a bike I saw and immediately loved. For cars it’s much harder. Sure Corvettes are nice, the new Miata’s gorgeous, but I always wanted to build my own car. Funny thing, I had selected the DF Goblin as my kit car of choice. Similar to the Ariel Atom, but with easier to find components and MUCH lower price… I spent the last couple of months watching for a Cobalt to come up. I wanted an SS Supercharged minimum, but then I started pricing things a bit more and the WRX based 818 started to seem a lot more reasonable. Admittedly the justification is: if I’m maybe doing this once in my life, I might as well [insert large amount of money here]. That said my budget has ballooned to about 15-20k depending on how much I can get for the excess donor parts. Here’s the thing… a brand new WRX starts around 26.7k…Mine will be 1000lbs less and probably higher horsepower…and the project has started! Project Bugeye WRX is officially home!

As you can probably see the motor’s removed. That’s what really happened…I looked up craigslist for WRX’s and lo and behold I found a guy that was selling a WRX…head gasket blown and he had a forged internals short block waiting to go in… It’s like half the work is done for me! (sort of…the downside is, having not taken it apart myself, I have little idea how to put it back together). That said he was going for a hybrid build 2.5L motor paired with 2.0L heads and transmission. I made a few calls today to FFR as well as a machine shop that specializes in those heads. This’ll end up expensive, but I’ve already got my first parts to list tomorrow…and we had a garage sale this weekend…made about 400 bucks selling off old projects. Just sold some more craigslist stuff yesterday and today for 380. I’ll list the good condition STI trunk and all the door skins tomorrow. I won’t need them. This project will come together in no time! Now I just need to get the gumption to actually order the kit. It’s been configured and sitting on my laptop for days…It’s just…somewhat frightening to pull the trigger… It’s what I want though…it’s always been the dream… so many tough decisions though…convertible or hardtop? In the mean time enjoy this photo of our Mazda 3 with an extra engine in the back! 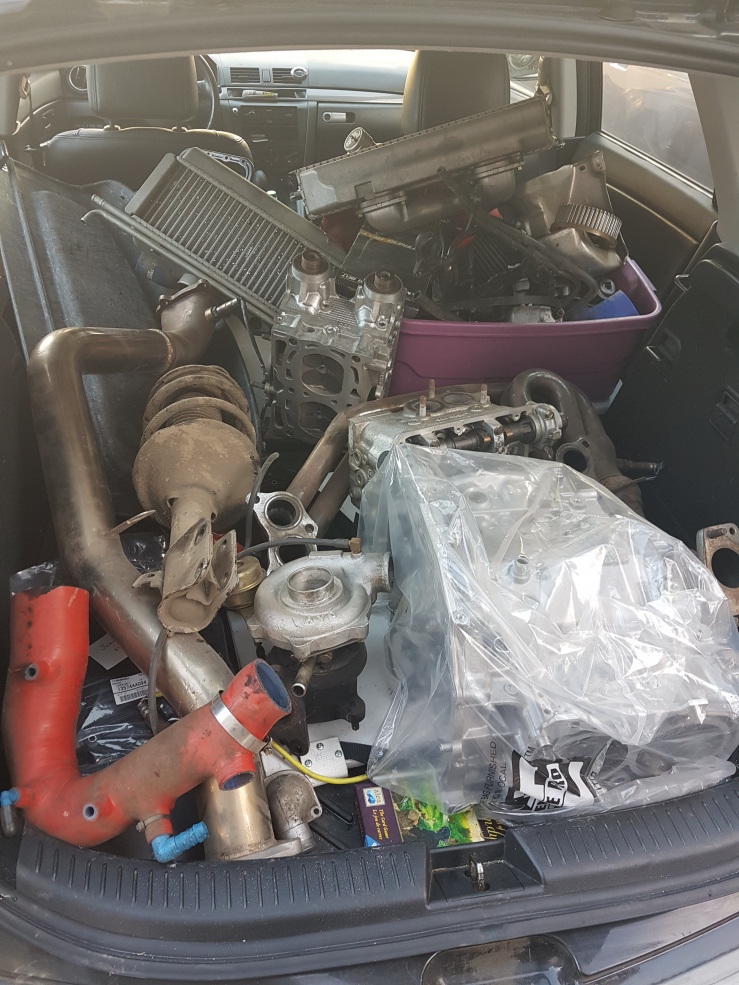 And an extra engine sitting outside the garage!