Specifically acquiring all of the OPFOR’s bullets into the Military Order’s faces.

A rough mission for the mighty forces of PanOceania and the Military Orders! We decided to Acquisition as there’s an upcoming local tournament and I hadn’t played it before. My list was an interesting one and in spite of its poor performance (dice and some of my mistakes) I actually really think I like it. Might make some changes and shift a few things around, especially with the order groups, but it seems to have a lot of good tools.

Unfortunately I totally spaced taking photos until about midway through Turn one. Summary: I spaced the Magisters across the board. Order Sgts link went left to try and take high ground. Joan possible link and Xenotracker went right to try and head that direction.

Turn I: Magisters sprint up the board, then use their groups orders to power the missile launcher into the backfield. I try to blast template his link team of Sakiel, Sukeul, and Makaul, but fail miserably and have to stop and hide out. Definitely mistake one, I should have sent the shotgun Magisters instead, I just thought I could do better with a circular template.

We also both forgot about Acquisitions 16” deployment zone. I think that would have made a big difference in that first turn. 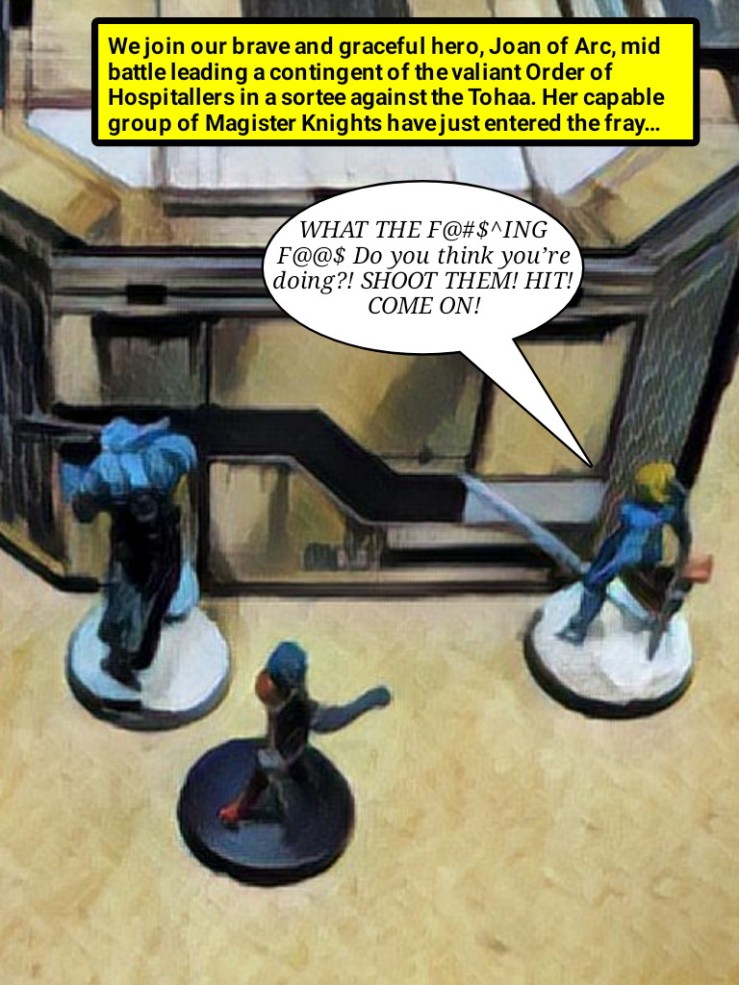 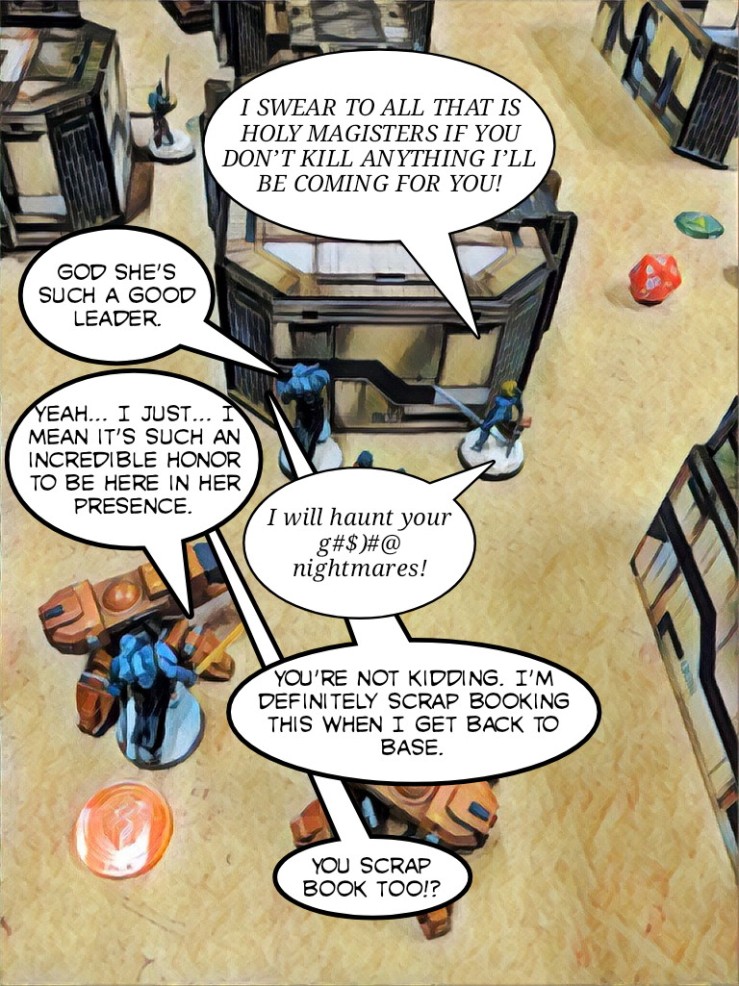 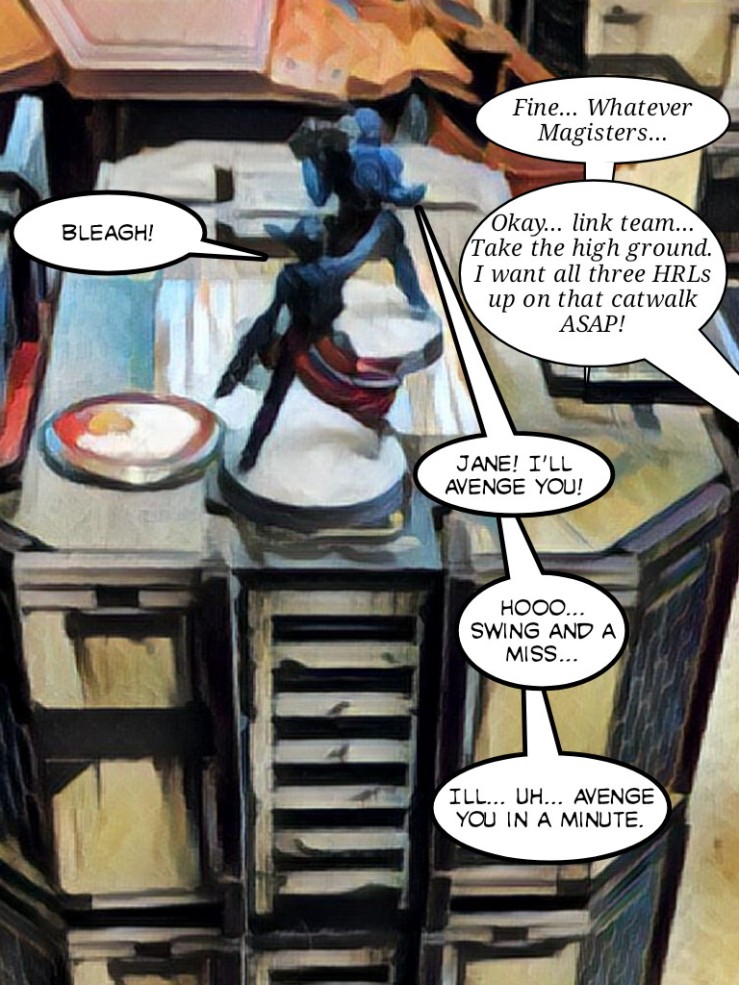 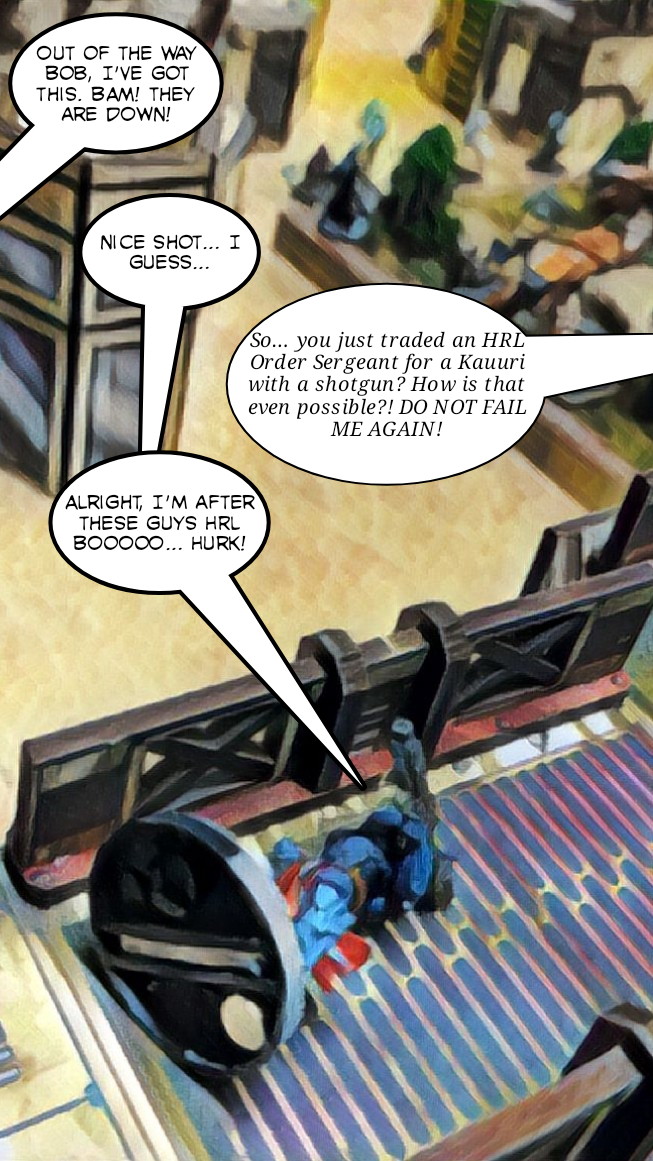 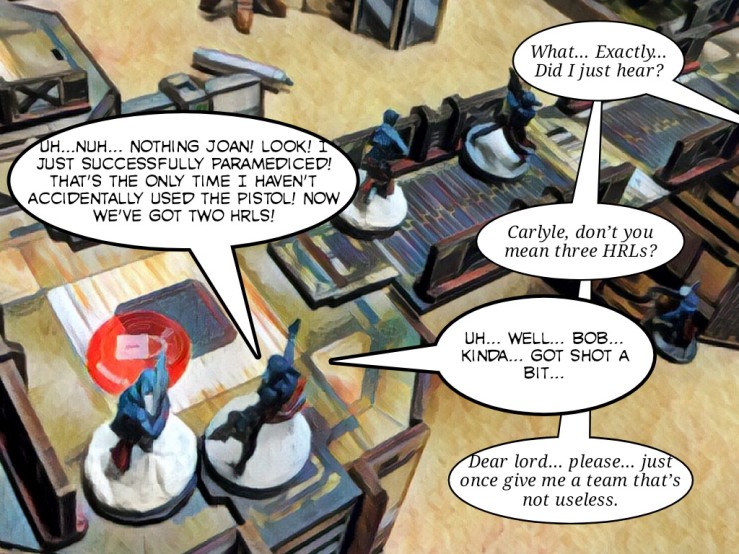 Oooooh… a rough first round for MO. The Magisters are somewhat worse for the wear having taken some wounds or been stunned in place. Meanwhile I tried to move my link up into a position overlooking the objectives. I figured with 3x HRLs in a link I’d do some good work… but no… not so much. First over the wall KO’d one of my link. I foolishly double moved having thought I wouldn’t take a shot, but a shotgun from just under 16” spelled the first unconscious. I brought up another HRL, swing and a miss. Swept them right they failed to hit again, so I brought up another HRL who finally managed to down the shotgun Kaauri. I tried to take a solid HRL shot at a linked group on the opposing side… and totally whifed, taking a loss instead. Lastly I put an order into the medic to try and recover an HRL… success!? How is this possible!? A PanO Medic actually helped someone!

Heading into reactive turn I’m actually somewhat confident. No I didn’t do nearly the damage that I should have been capable of on stats alone, but I got some of my link up  to cover the objectives and Joan is still in the back. The Magisters are in decent position to cover the objectives and with panzerfaust and light shotgun they have some options. My plan is to survive this turn then press the HRL link to try and shut down firelanes, then move up Joan and Hospitallers to try and get some objectives!

My plan does not take effect… 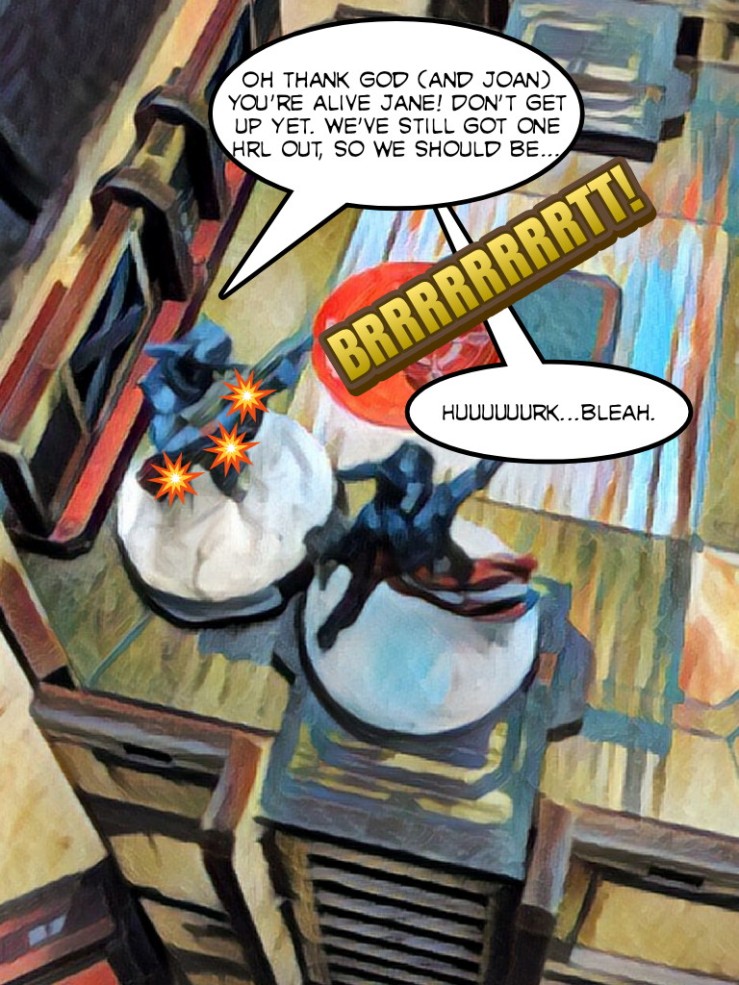 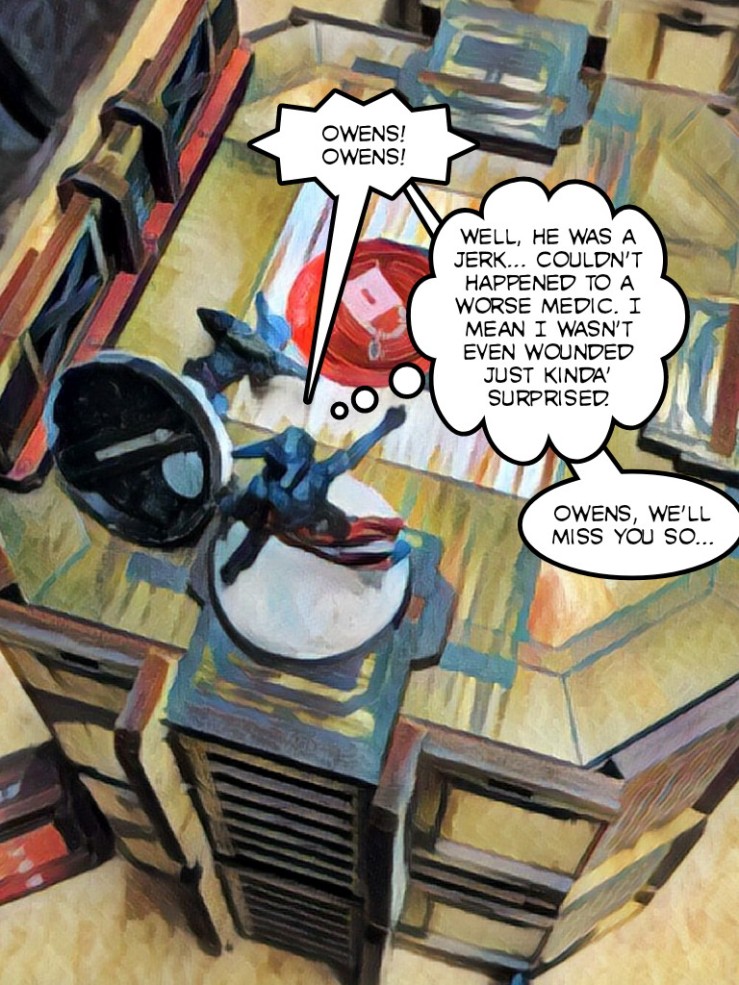 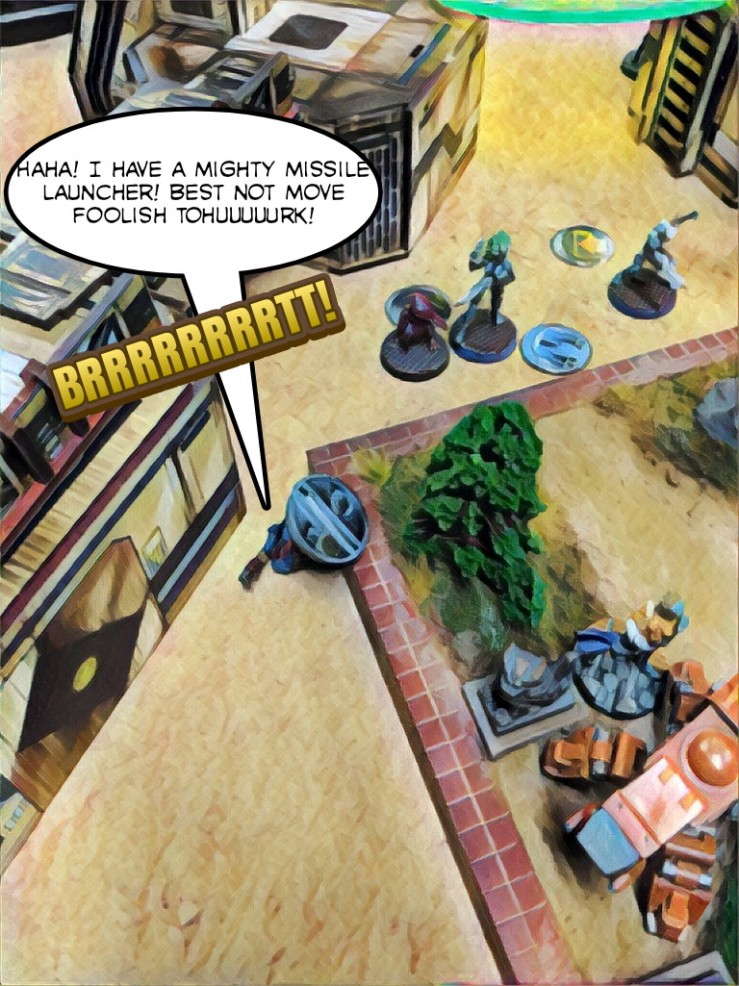 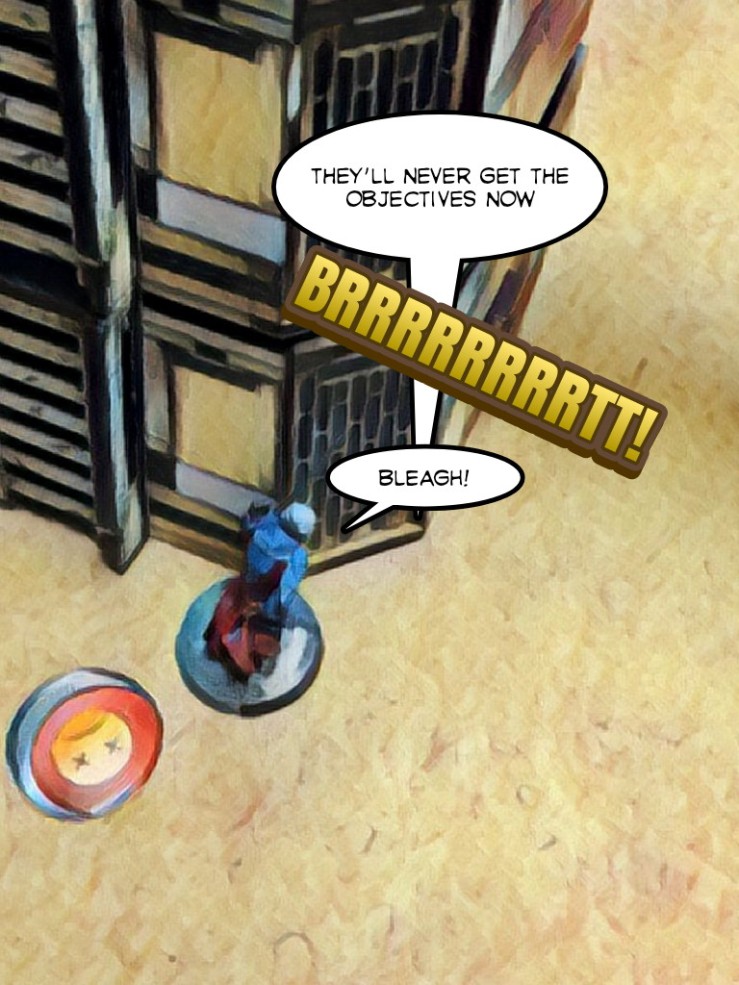 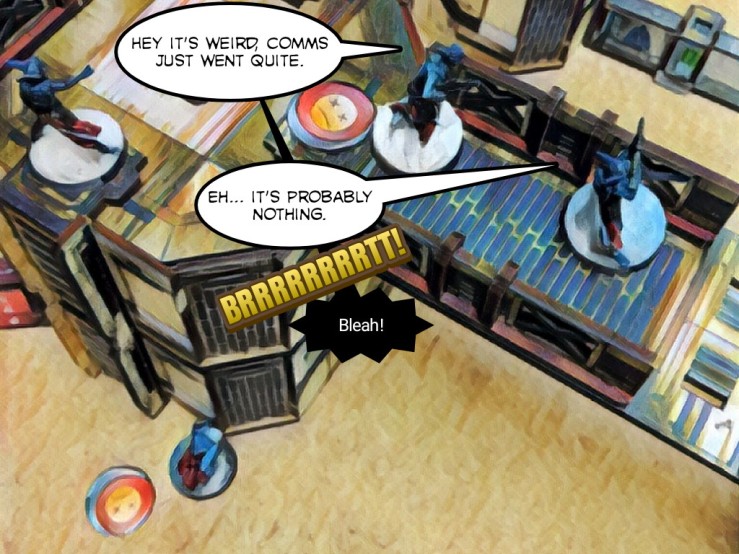 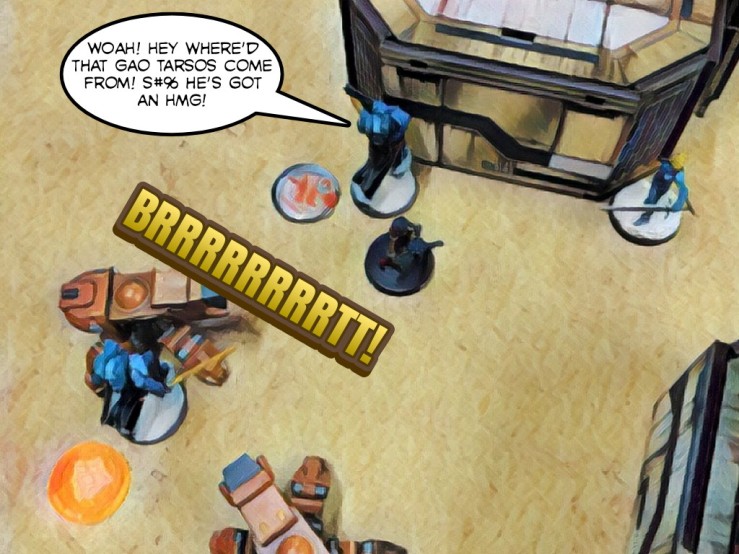 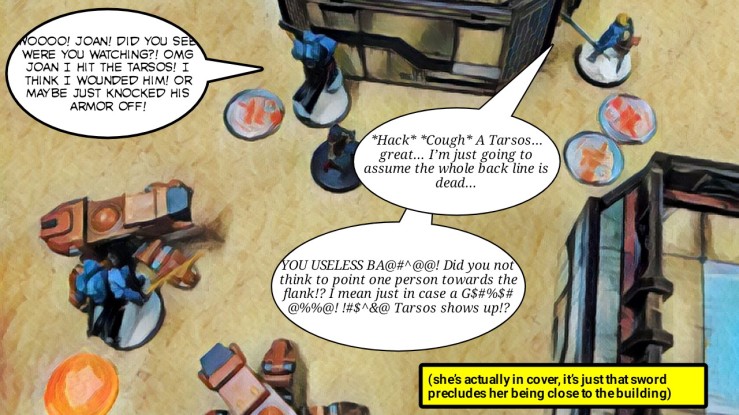 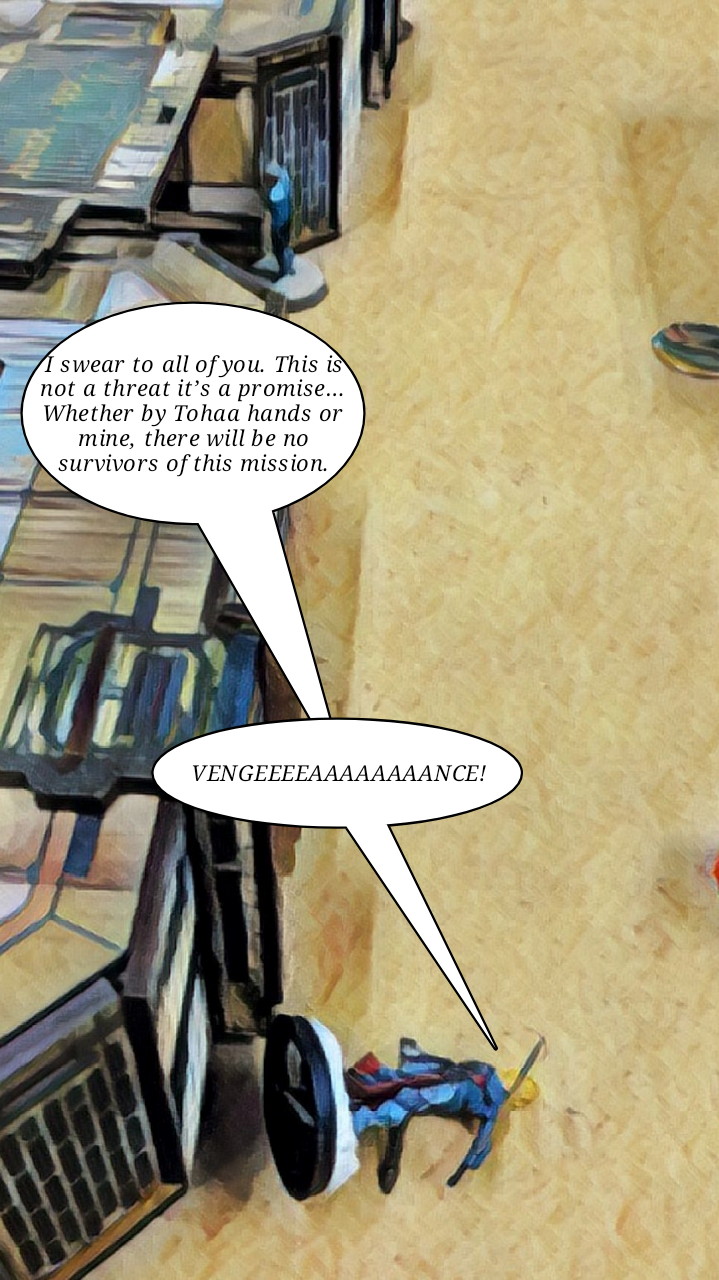 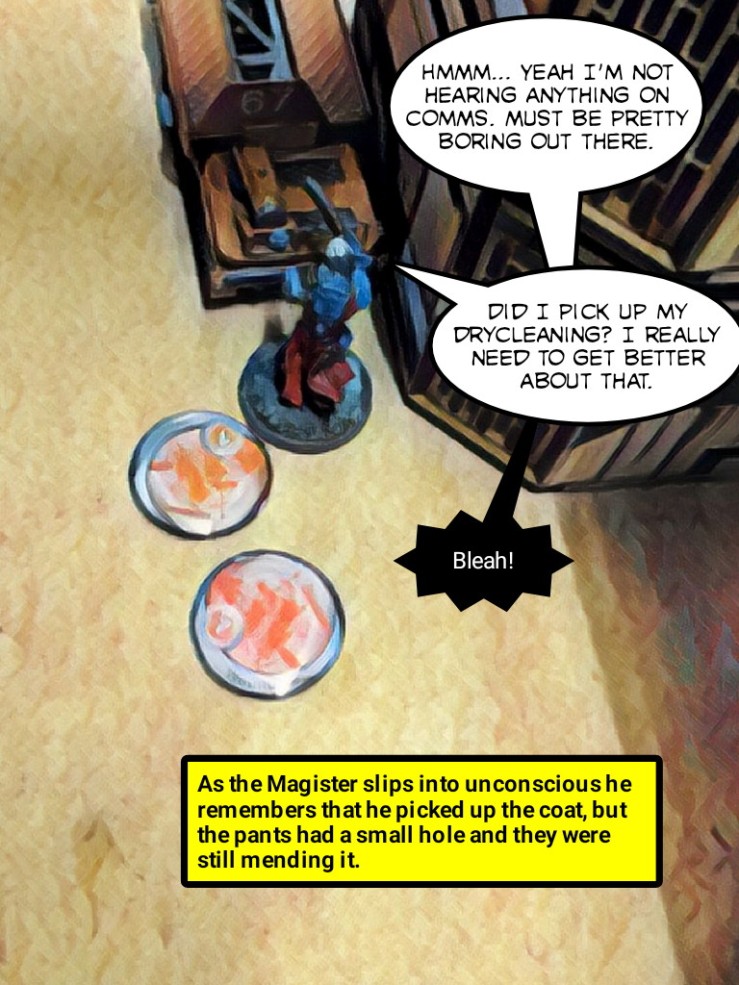 Well… that was a thing that sure happened… it happened a lot… I was not a fan. I swear we could not ARO ANYTHING this round. It was rough! So after losing all the Magisters, both link team medics and Joan, I’m in loss of lieutenant and I have a wounded Hospitaller, a good hospitaller, a warcor, and two HRL Order Sgts… not a lot to work with, but if I trade up at least a little I can deny him some points, and heck…maybe that hospitaller can work his way up to an objective? 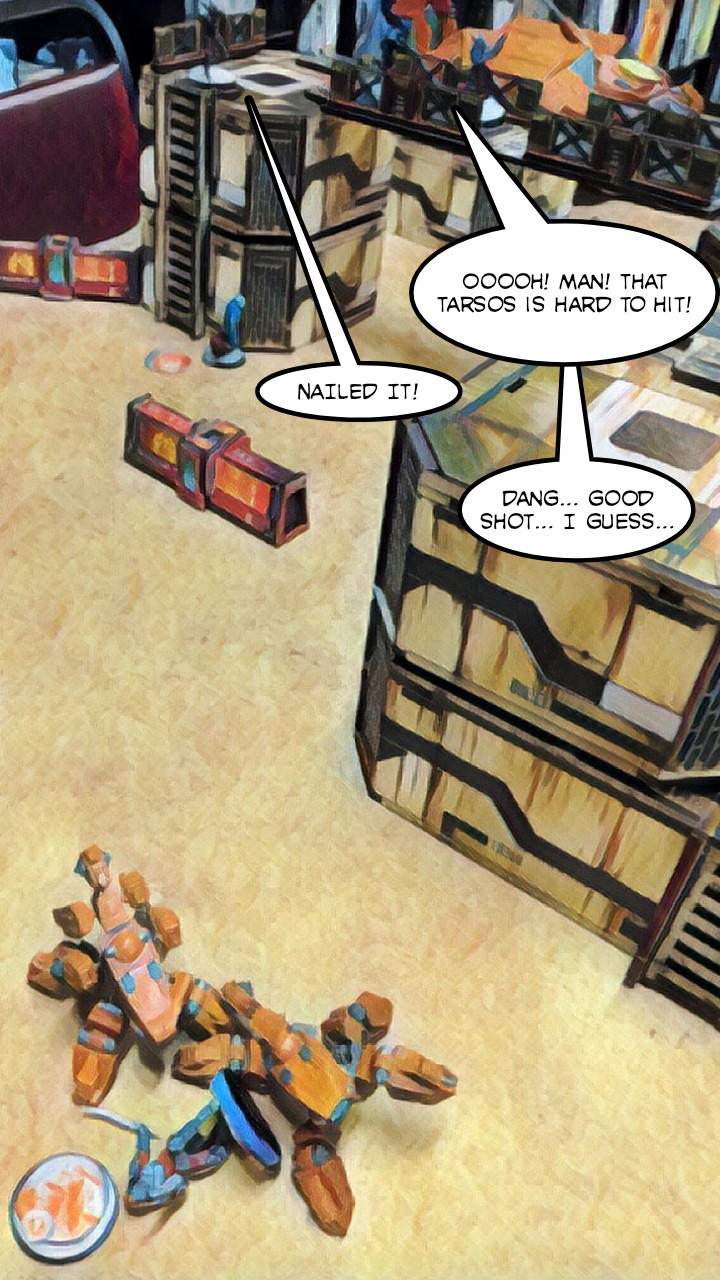 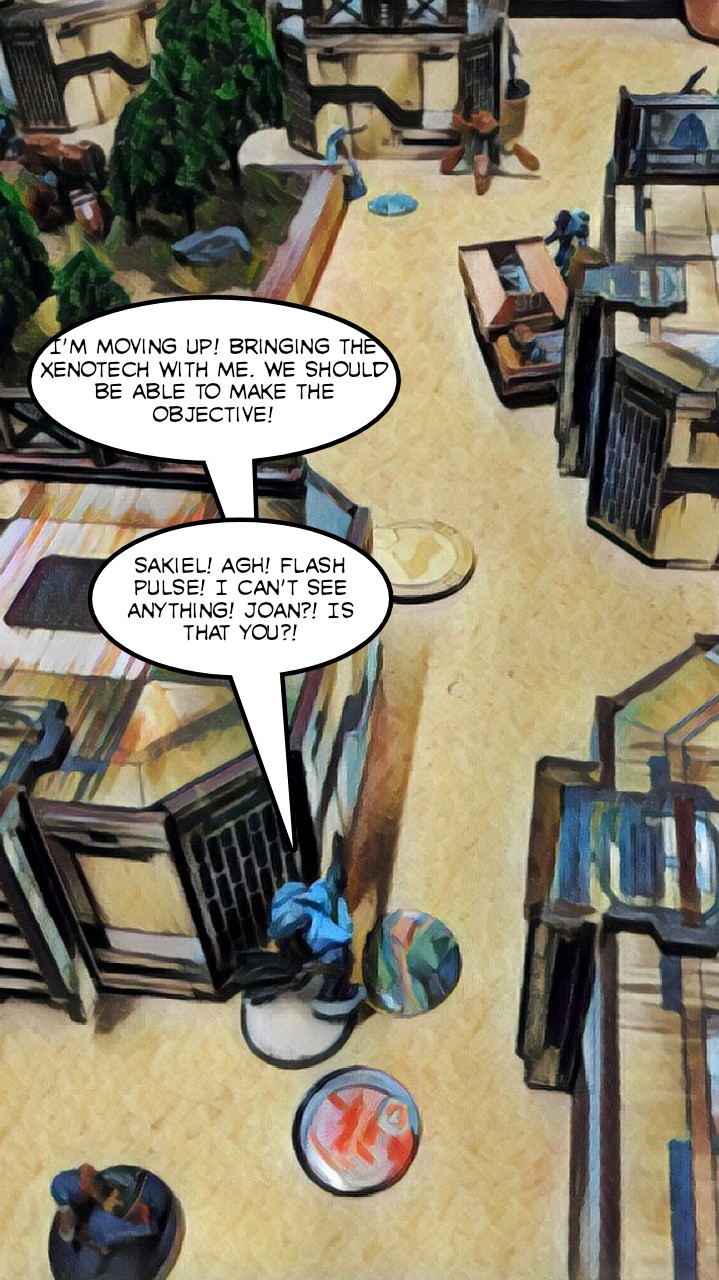 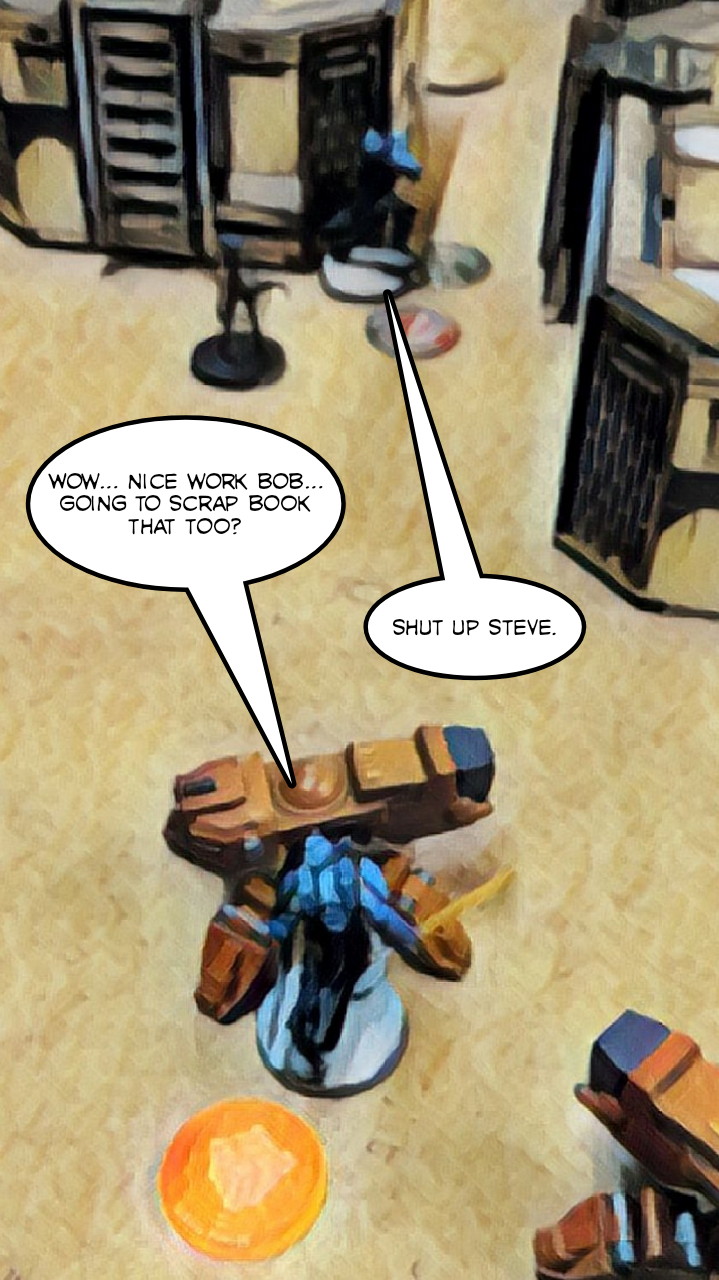 Well… that was a short lived active turn… I guess the Tarsos is down… so that’s… fine… I didn’t lose anyone, but I’m immediately reminded that I didn’t quite place my HRL order sgt correctly as he gets shot in the back. 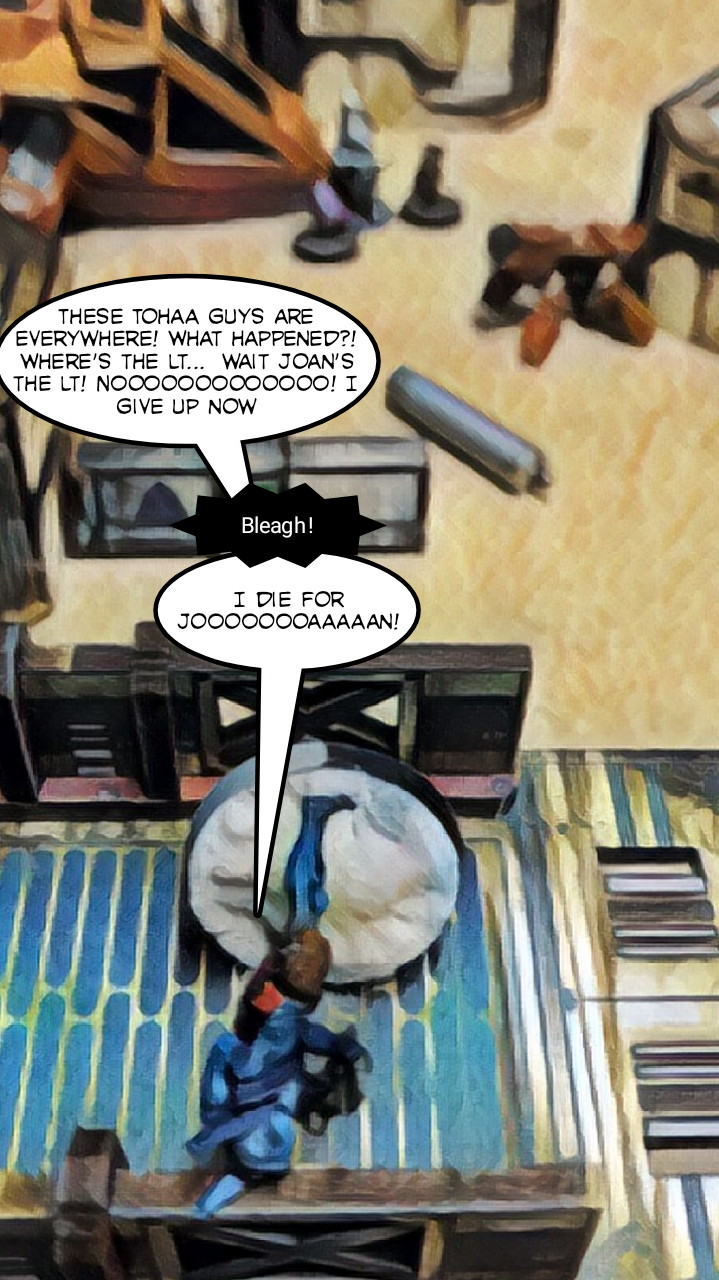 Bottom of Turn 2… I’ve got two Hosipitalers on the field and a Warcor… I’ve got a plan? He rushed his Lt into position near an objective. Maybe I can put him into loss? 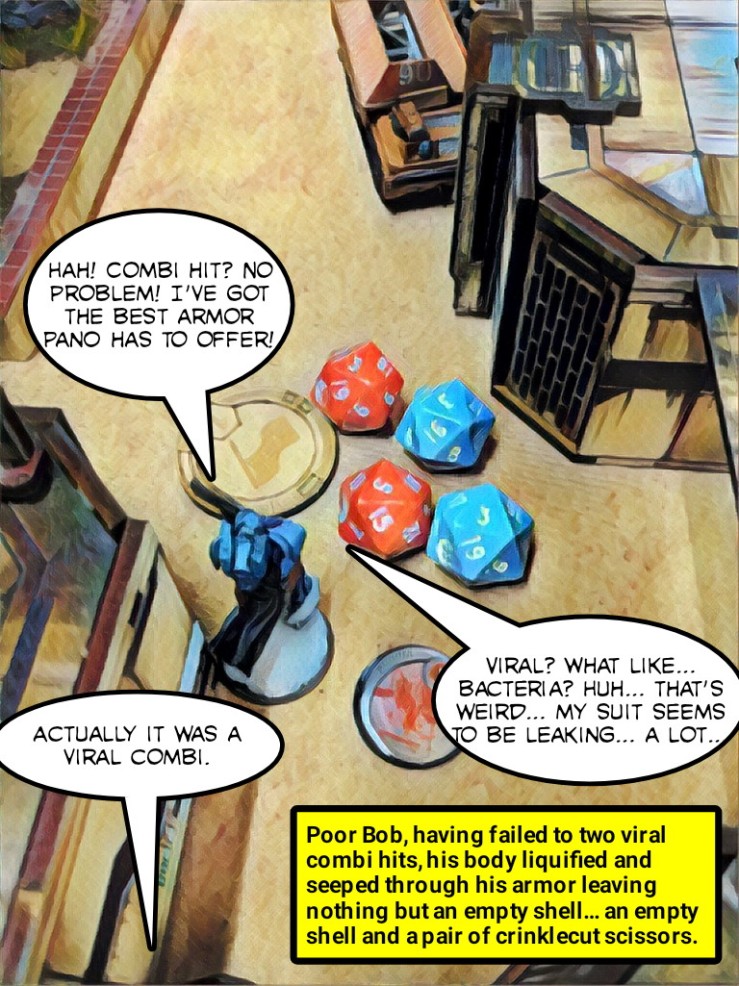 Oh yeah… He’s Tohaa… he’s definitely got a COC Kaeltar… but I’d forgotten all about that in a desperate strategy to try and claim one objective. Bob! Quick! Take your Lt order and shoot that Sakiel! 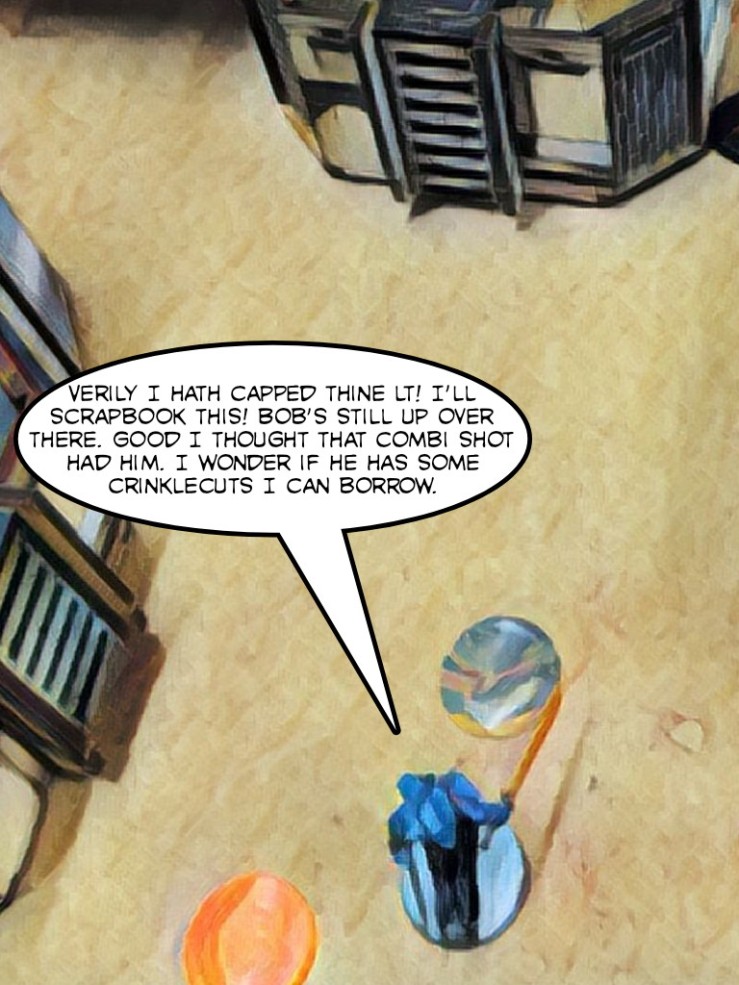 And thus endeth the game. The Tohaa ran up and grabbed all the objectives they needed, fired some D-Charges for a classified and that’s all she wrote.

As part of the PanO military propaganda machine I’m going to say we had a solid tactical retreat this mission with a final score of 10 for Tohaa and -1 for Military Orders. Yep… definitely a pyrrhic victory for the Tohaa. Definitely not a crushing defeat at all. 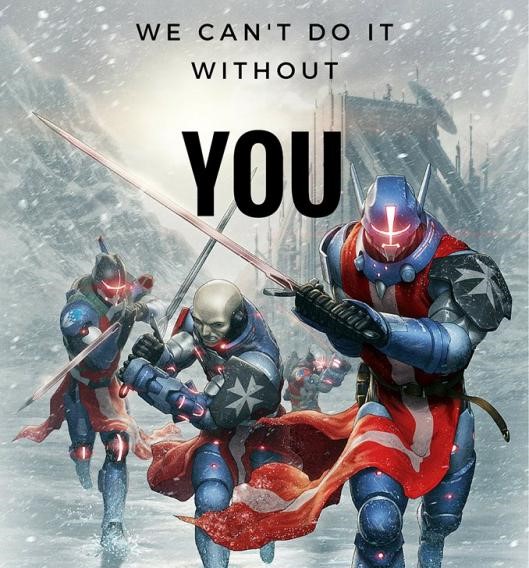